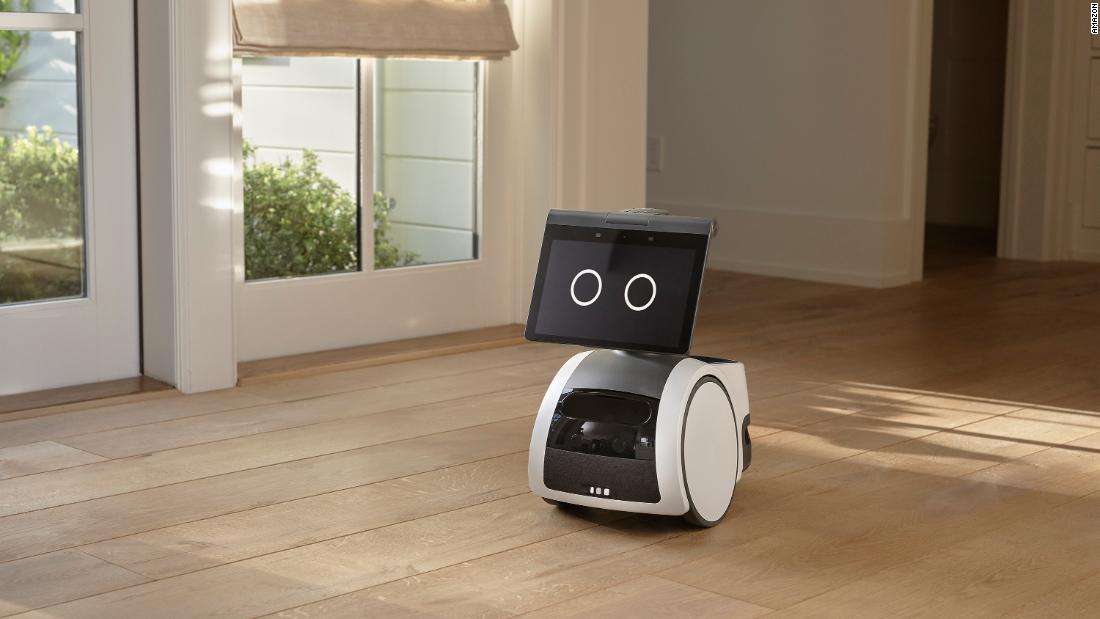 Amazon’s Controversial Vision for the Future of Your Home Security

At an invitation-only press conference on Tuesday, the company showcased a 20-pound, dog-like autonomous robot named Astro with big cartoon eyes on the face of its tablet and a cup holder. The robot – much like an Alexa on wheels – uses voice recognition software, cameras, artificial intelligence, mapping technology, and voice and facial recognition sensors to zoom from room to room, capturing images. live videos and learn your habits.
Amazon also announced a subscription service called Virtual Security Guard for Ring cameras. Ring, the smart doorbell and camera company it acquired in 2018 for $ 1 billion, will work with third-party professional surveillance companies, such as Rapid Response, to analyze a live feed from its outdoor cameras. Agents can use the camera’s two-way conversation functionality to communicate with visitors and activate the camera siren or dispatch emergency services as needed. (Ring already sells a $ 250 drone called the Always Home Cam with an attached camera that can automatically fly around your house and stream video to your smartphone.)

For Amazon, these products hold the promise of taking a share of the lucrative home security market and pushing customers deeper into its household product ecosystem. Other tech companies have entered this market over the years, including Google with its Nest Aware video recording system and the Nest smart doorbell. Companies such as Logitech, Arlo, and Netamo offer similar products.

But Amazon’s decision to expand its offerings in this product category comes at a time of taking a close look at the data feed and privacy practices of the biggest players in the tech industry. And Amazon’s latest security products, with their potential for greater surveillance in and around our homes, can test just how much businesses can push consumer comfort levels with such intrusive technology.

â€œTech companies have promised a future like Star Trek, but Amazon is trying to sell us RoboCops,â€ said Albert Fox Cahn, founder and executive director of the Surveillance Technology Oversight Project and a fellow of the New York University School of Law. “And while these products promise safety, they really pose a threat. These sensors would give us a disturbing new reality where it’s impossible to escape the tech giant’s roaming drones in our own homes.”

It’s a seemingly bold move for Amazon, as its reach and power have caught the attention of regulators around the world. Amazon has already caused privacy concerns with its smart home devices. In 2019, for example, a Bloomberg report revealed that Amazon employed a global team that transcribed Alexa voice commands to captured Echo devices after the wake word was detected to help improve Alexa’s understanding of the human speech. (Amazon later said people could opt out of Amazon using their voice recordings.)

Privacy advocates have also criticized a move Ring made in 2019 to give law enforcement easier access to videos recorded on its doorbells for active investigation. (As of June, police and firefighters can only request information or videos related to an ongoing investigation through public posts called Help Requests.)

Shortly after Tuesday’s event, leaked internal documents released by Motherboard revealed concerns raised by the Astro development team regarding the security and privacy of the Astro robot, a person who worked on the project l ‘would have called it a’ nightmare for privacy which is an indictment of our society. An Amazon representative rebuffed the report’s characterizations in response to Motherboard and noted that Astro uses on-device processing for tasks such as recognizing individuals.

Following the publication of this article, Amazon told CNN that business privacy is fundamental to the design of its products. “We only collect the information necessary to provide and improve the experience of our customers. When we collect data, we secure it and use it responsibly to improve the experience, while providing customers with transparency and control over their information. “said a spokesperson.

How Amazon is trying to break into customer homes

Amazon kicked off its presence in our homes in 2014 with the Echo speaker, which became a hit for the company. Amazon has since crammed its virtual assistant Alexa into every type of device imaginable, effectively acclimating its users to the possibility of the company listening to them all the time in exchange for greater utility. Now his latest products are basically launching him on steroids.

â€œIt’s clear that we’re now entering different territory with the arrival of more experimental products like the Always Home mini-drone camera and the Astro robot, but I think Amazon is using its products to learn more about the will. consumers to have such devices in their homes, “said Ben Wood, chief analyst at market research firm CCS Insight. Wood also said some consumers are willing to compromise on privacy for the sense of comfort and security provided by products from companies like Amazon.

Amazon appears to be taking steps to make this compromise less severe.

A spokesperson for Ring told CNN Business that any agent monitoring a feed from their Virtual Security Guard service cannot access recorded recordings, download or store videos, and customers will know which events have been viewed by an agent. Customers can also set up privacy zones that are closed to agents, but this can be uncomfortable for visitors and random passers-by who are still being filmed.

On the Astro product page, Amazon notes that the robot’s microphones, cameras, and sensors will be disconnected when they are turned off. When Astro is recording, a light will turn green and it can be programmed to bypass certain areas of the house. Additionally, face images can be deleted and anything sent to the cloud will be encrypted. Astro creates a map of the house based on where the robot is exploring, but the company said the data, which is sent to the cloud, does not contain actual images or streaming video.

Then there is the appearance. Amazon has disguised the surveillance technology as an adorable watchdog, making it much more appealing to customers, according to Jonathan Collins, director of market research firm ABI Research. â€œCuteness is subjective, but certainly the more emotionally invested someone is with a device – and this can be motivated by pleasant visual or audio exchanges – the more likely it is to be used,â€ he said.

In a YouTube video posted by the company this week, Amazon developers said they drew inspiration for Astro from sci-fi movies and cartoons. They also noted that it was important to include eyes on the robot and give it a personality, so that it can better connect with users.
Other tech companies have tried to gain traction with home robots, including Softbank’s Pepper, Anki’s Vector robots, and Samsung’s Ballie, the latter of which allows users to monitor pets, family members or check things around the house when they are away. But Ballie was never marketed and the others never caught on.

Astro, however, is building on the company’s strength in robots, artificial intelligence, computer vision, sensor technology, voice interactions and cutting-edge computing, Wood said. Coupled with Amazon’s reach and scale, this launch is much more notable, he added.

â€œWith an introductory price of $ 1,000 and a small number of units available to a limited audience, I think the Astro robot will sell out within minutes when it becomes available in the US market,â€ said Wood. (This will ultimately cost $ 1,500 after an invitation-only purchase period.)

If Astro is successful, it might just be the start. According to previous projections from ABI Research, around 79 million households around the world will have a robot in the house by 2024. And one of the selling points of these robots will almost certainly be the home security features.
In the YouTube video, Charlie Tritschler, vice president of Amazon products, said the idea for Astro came after a senior management meeting when someone asked if anyone in the room thought people wouldn’t have robots at home in the next five to ten. years. â€œEveryone said, ‘Yes we are. So we said, “Let’s start,” he said.